During the briefing, the SBU Chief of Staff Oleksandr Tkachuk and the Chief of the SBU Department on National Statehood Protection Viktor Kononenko informed that the SBU officers prevented provocation of Russian secret services organized on ethnic grounds in Odesa.

The Kremlin still attempts to put Ukraine at odds with friendly neighboring states by creating artificial ethnic conflicts and speculation that infringes on ethnic minorities. ‘We revealed the first of a series of planned provocations concerning an ethnic minority in Odesa region’, Oleksandr Tkachuk stressed. He mentioned that the SBU previously recorded such attempts in Western Ukraine.

The pattern of the Russian secret services is unchangeable – paid out act of vandalism or sabotage against historical heritage or institutions of ethnic minorities. After that a fake protest is organized and no representatives of the ethnic minority take part in it. ‘The SBU recorded that the same people performing the order of Kremlin organize these provocations in different regions of Ukraine’, the SBU Chief of Staff underlined.

Known to the law enforcers leader of the radical NGO ‘Nazhdak’ Mykola Dulskyi, who was spotted during the blocking of Lviv-Rava-Ruska highway organized the ‘protest action’ in Odesa. ‘The SBU recorded his communication with the coordinator of the provocation who came to Odesa from Kharkiv’, Oleksandr Tkachuk said.

According to the plan of Russian secret services the participants of the ‘protest’ had to march in Odesa from the monument of the poet Khrysto Botiev to the consulate of Bulgaria. In this way they voiced their protest against alleged infringement of ethnic Bulgarians in Ukraine. ‘The demonstrators’ who were agitated by 10 USD each were given provocative banners. Russian handlers allocated 80,000 UAH and 500 USD to organize the fake march and embezzled the part of the money. ‘The maximum plan of Russian secret services included the attack of pseudo-nationalists at a peaceful march using fires’, the SBU Chief of Staff informed. He added that from one boot they got banners in Bulgarian language and Ukrainian nationalistic ones as well. 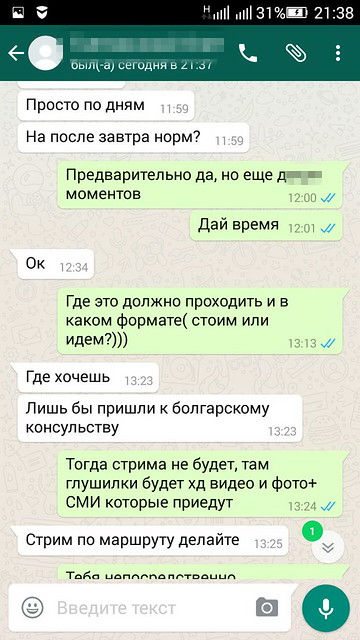 By the reason of accurate actions of law enforcers the paid show didn’t take place in Odesa and Russian channels didn’t get a nice “picture” of fake infringement of ethnic minorities. ‘We detained the coordinator of this action, who on purpose arrived from Kharkiv. He confirmed the fake character of the protest and gave the organizer’s name’, Oleksandr Tkachuk emphasized. According to the information provided by the SBU it had to be the first action from all provocations pre-arranged by Russian secret services in Odesa. The emphasis was put on Odesa, but similar “shows” are planned in Kharkiv, Kherson and Mykolaiv. ‘We know that the main acts of provocation are planned by Kremlin in the first half of May’, Oleksandr Tkachuk mentioned. The SBU is aware about that and will not allow to discredit Ukraine in the eyes of international community.

The investigation of the case about shelling of the Consulate General of the Republic of Poland and blocking of Lviv highway is under way. ‘We conducted 7 searches, 4 suspected persons were kept under custody by the court, 2 suspected persons including Dulskii were put on wanted list’, Viktor Kononenko informed.

The SBU is working and will not allow the realization of provocations planned by Russian secret services. ‘I promise that everyone, who agreed to embroil Ukrainians with friendly nation for Kremlin money will not avoid responsibility’, the SBU Chief of Staff emphasized.

Based on all facts the pre-trial investigation within the unified criminal proceeding initiated under Part 2 Article 110 of the Criminal Code of Ukraine is under way.

For the Attention of the SBU Head