In the framework of the visit of the NATO delegation headed by the Director of the NATO Office of Security Todd Brown an international treaty – Administrative Arrangements on Protection of Classified Information – between the Ukrainian Government and NATO was signed. 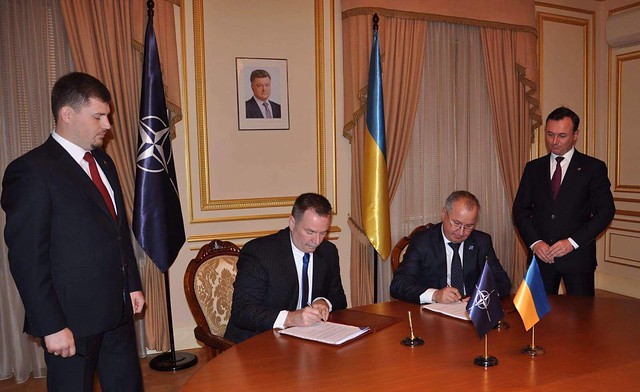 SBU Head, General of the Army, Vasyl Hrytsak signed the document on behalf of the Ukrainian Government.

The mentioned instrument is aimed at specifying the procedure of mutual protection of the classified information set in the general agreement on security between Ukraine and NATO (1995) and bringing the related national mechanisms in line with the NATO standards.

“Signing of the agreement is another step forward to deeper cooperation between Ukraine and NATO”, - the Head of the SBU said at the signing ceremony. He added that the Alliance’s support for our security sector development is of vital importance.

“Today the Service undergoes an active reform process taking into consideration NATO best practices” – Vasyl Hrytsak stressed. According to him, the reform concept, which is currently being examined by the National Security and Defense Council, provides for transformation of the SBU into a real security service that is a guardian of the Ukrainian nation and corresponds to Euro-Atlantic standards.

Moreover, in the framework of the visit, the SBU National Academy holds the ceremony of the opening of training course on reform of the security services, initiated by the NATO International Secretariat.

It is planned that by the end of the year foreign partners will share their national experience of improving the security and defense legislation, implementing reforms, relevant communication with the public, etc.

For the Attention of the SBU Head